The Doves & Hawks Tour features singer-songwriters Rodney DeCroo,  Sarah Wheeler (Vancouver), and Mark Davis (Edmonton) in the round through venues and house shows in BC and Alberta this October. 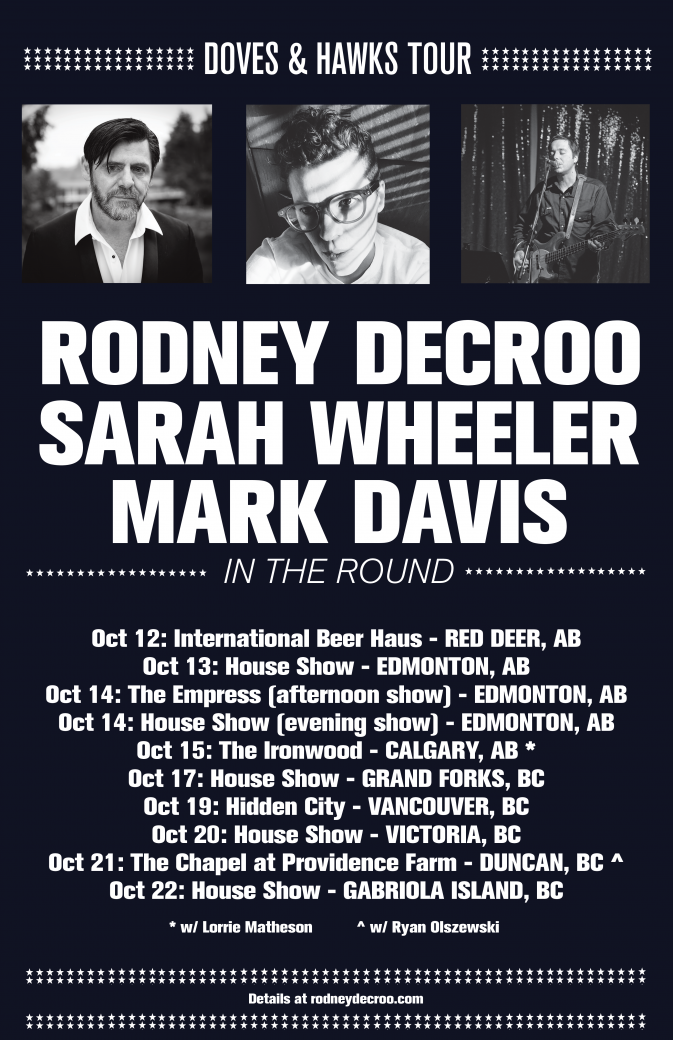 RODNEY DECROO (Vancouver)
After returning from a five-year sabbatical from music in 2015 with the intimate collection Campfires On The Moon, Vancouver singer/songwriter, poet and playwright Rodney DeCroo’s musical evolution continues with his seventh full-length album, Old Tenement Man, a sprawling work of unflinching lyric-driven rock and roll, infused with the legacies of Lou Reed and Leonard Cohen.

“Tenement is, to borrow a phrase, a brilliant record. It’s a grit-caked, guts-stained guttural work that’s so immediate, alive and honest you’ll hear its heartbeat before you press play, but so timeless that you’d swear you could sing every line on first listen.It’s astonishing, really, just how classic of a contemporary rock record it is.”
– The YYScene

Sarah Wheeler is a dyed-in-the-wool singer songwriter. With the upcoming release of her fourth album, Sarah shows the mark of over twenty five years of songwriting. Wheeler’s musical heritage was handed down to her through her grandfather’s pioneering efforts as a jazz pianist in local Vancouver clubs during the 50’s and 60’s. In that period he backed jazz greats including Nat King Cole and Sammy Davis Jr. Although she has enjoyed collaborating with other musicians, lending her vocals to recordings such as “A Small Wonder” by A.C. Newman of the New Pornographers, and sharing the stage with artist including Dan Mangan and Tanya Tagaq, this Vancouver based roots artist has consistently remained focused on writing and performing her own music.

Stuart Derdeyn from The Province reviewed Wheeler’s work by saying “this is a very solid effort from an artist who has always had it but really tapped the right points and doesn’t miss here”…she gets good Lucinda Williams-esque steam chugging along.”

MARK DAVIS (Edmonton)
Mark Davis will soon release his twelfth full-length recording. His last solo album,Eliminate the Toxins was nominated for the Polaris Music Prize and spent several months on the National Campus and Community Radio charts. Mark’s previous release, Mistakes I Meant to Make, was called a “tour de force” (Penguin Eggs, Exclaim), “the roots release of the year” (Eye) and “stunning” (Uncut), and prompted radiofreecanuckistan to call Mark “one of the most under-rated songwriters in the the world.” Mark also leads heavy wave duo, Concealer on bass and vocals, and has guided the experimental country band, Old Reliable through 25 years. Mark has shared stages with the likes of Guy Clark, Alejandro Escovedo, K’naan, Wilson Pickett, Ray Condo, The Sadies and Richard Buckner.