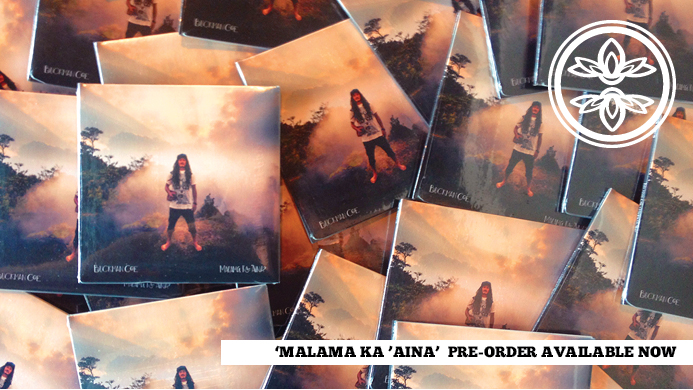 Drawing strongly from Reggae’s mixture of joyful, danceable rhythms and socially conscious vibes, the latest album from Vancouver’s Buckman Coe is a gorgeous and downright infectious manifestation of the artist’s spiritual nature and passion for social justice. It is simultaneously his most political album to date and possibly also his most uplifting!

Featuring masterful production by global/electronic artist Adham Shaikh and musician-activist Jason Kecheley, ‘Malama Ka ’Aina’ (pr: Ma-LA-ma kah-AY-nuh) – a Hawaiian phrase meaning to respect the land and live in harmony – sees Coe’s almost ethereal, soul-drenched voice soaring over arrangements that draw from folk, pop, soul, psychedelia and hip hop, and singing songs that celebrate the awakening of social consciousness and the togetherness of those who are fighting for a better world.

“False Flags” is an equally “big” sounding song that calls out world leaders for perpetuating violence against their own people and turning the populace against false enemies in order to distract from their corporate agendas.

And “World Waking Up” and “Jah People” are both funky tracks that celebrate those who are joining social justice movements, while questioning whether it’s enough.

The album also contains plenty of tracks that are less directly political in nature.

There are songs about love, desire, and giving each other courage in uncertain times. There’s another about a community losing a promising, vibrant young man and the desire to make sense of or derive inspiration from tragedy.

The title track is a tribute to Coe’s “spiritual home” of Hawaii. It speaks of the importance of finding natural environments that replenish us, and of the need to respect the traditional occupants of the land.

The final track is a psychedelic journey of personal awakening.

Coe himself is a living manifestation of the values he sings about.

Born in London, England but raised in Edmonton, he moved back to England at 17 to do a degree in Economics and Geography at the University of Leeds, focusing on economic inequality. He then moved to Colorado to study counselling psychology at the Buddhist University Naropa.

Coe went on to teach yoga and work with people with special needs and mental health issues – all the while playing music, as he had throughout his life.

He released a home-made folky debut in 2009, followed it up in 2012 with ‘By the Mountain’s Feet’, and in 2013 with an EP that hinted at the more Reggae-influenced sound of ‘Malama Ka ’Aina’.

Though Coe has never chased after acclaim, it has followed him nonetheless, the demand for his albums and live performances quickly growing to the point where he had to give up his day jobs and devote himself full-time to music.

Readers of WE Vancouver named his band the Best Band in Vancouver, and readers of the Georgia Straight voted it the second best indie band.

With the release of ‘Malama Ka ’Aina’, Coe stands to become even more celebrated by those who love him and much better known among those who don’t.