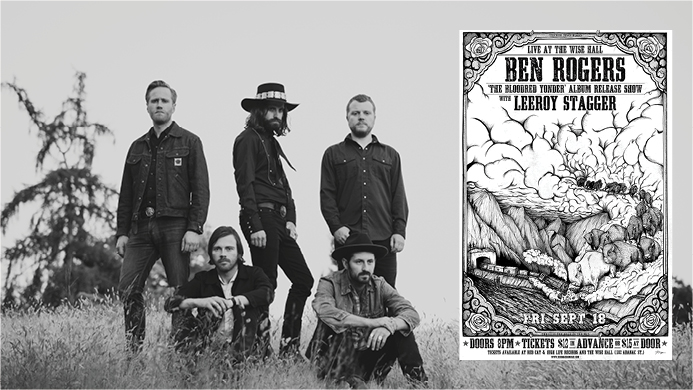 Friday night in Vancouver, BC: Ben Rogers will be releasing his debut album with Tonic Records, ‘The Bloodred Yonder’, at the WISE Hall. We are thrilled to release this album of outlaw country. Come on out and bring a CD home with you too- boot stomping goes beyond the WISE Hall!

THE PRESS ON ‘THE BLOODRED YONDER’:

“The Bloodred Yonder operates as a loving tribute to the golden age of country while bringing something new to the table. Musically, Rogers and band prove nothing if not flexible, swinging easily from bourbon-hazed ballads to gun-smoke folk to paisley-dipped Americana.”
– Mike Usinger, The Georgia Straight

“In the world of The Bloodred Yonder, there is plenty of rich, sinister, and sometimes hilarious scenery to escape to. You can run with the outlaws for a while.”
– Sarah Bauer, Beatroute Magazine

“VANCOUVER’S Ben Rogers can probably quit his day job now. With The Bloodred Yonder, he has created a kind of independent roots-rock mini-masterpiece that not only makes pretenders in the genre sound even lamer, but also sets the bar for future artists to strive to attain. It’s that good.”
– Jeff Monk, Winnipeg Free Press

“Vancouver roots singer-songwriter Ben Rogers is quickly proving himself as one of the most accomplished figures on the West Coast’s indie scene. […] Get ready for plenty of shiver-inducing moments thanks to an album that taps into a timeless essence usually found in the voices of more seasoned veterans.”
– Francois Marchand, Vancouver Sun