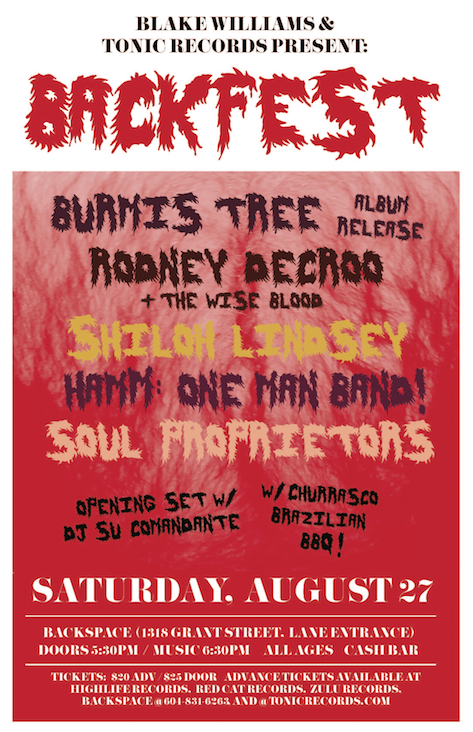 Burmis Tree
Conjuring the lonesome whisper of the Great Plains and the ancient hymnodies of the Cordillera, Burmis Tree weaves a mythological patchwork of western historiography, exploring the darkness found in the ghost towns, badlands and wandering skies of the Canadian West. Burmis Tree’s album Blood of the Land is being released at Backfest.
burmistree.bandcamp.com

Shiloh Lindsey
Seasoned songwriter and storyteller Shiloh Lindsey is a most unique character in Canadian music. Hard-raised on a ranch in south central Alberta, based for many years out of Vancouver, and most recently returned from a residence in Halifax, she pairs open country authenticity with big city sensibilities, for a complex blend of prairie, mountain and coastal textures.
shilohlindsey.ca

HAMM: One Man Band!
Hamm One Man Band is legendary Vancouver musician and entertainer Stephen Hamm’s latest solo adventure into psychedelic outsider rock. Combining his larger than life personality with Organ, Synthesizer and Theremin let Mr. Hamm take you on a musical journey into new dimensions. Though Stephen has played in a number of seminal Vancouver acts; Slow, The Evaporators and Canned Hamm, One Man Band has played only a couple of shows, most recently the Khatsalano Street, the show has been met with excitement, joy and requests for more!

Get your tickets now. It’s going to be a good one!